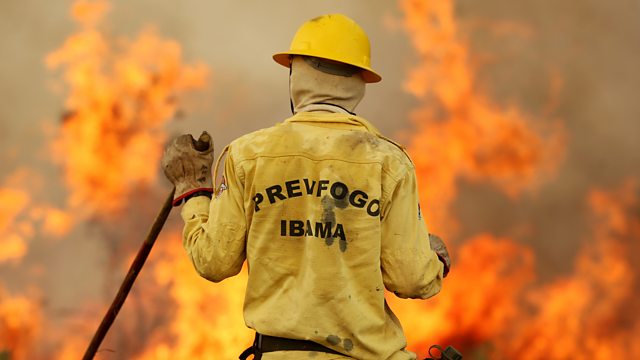 Scientists refute government claims that this year’s Amazon fires have been normal – satellite data shows they are the worst since 2010.

This year’s Amazon fires have been worse than since 2010, scientists blame a government attitude which they say has encouraged deforestation. Government funded scientists have contributed anonymously to the finding – fearing for their jobs.

Food crops and fungus are not normally seen as compatible, but a mutually beneficial relationship between these organisms may help reduce the need for chemical fertilisers and combat climate change.

Hayabusa 2, the Japanese space mission is returning to earth after its mission to blast a crater in a distant asteroid.

And how the chemistry of protein analysis is helping psychiatrists and emergency medics deal with the effects of the street drug spice.

(Image: A Brazilian Institute for the Environment and Renewable Natural Resources (IBAMA) fire brigade member is seen as he attempts to control hot points during a fire. Credit: Reuters/Bruno Kelly)