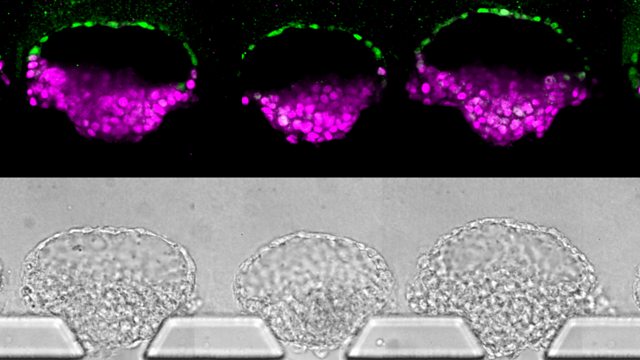 Embryoids from stem cells; water vapour in atmosphere of rocky exoplanet; comet from another world

Scientists know very little about the first few days of the life of a human embryo, once it's been implanted in the womb. Yet this is when the majority of pregnancies fail. Professor Magdalena Zernika-Goetz at Cambridge University is a leader in the field of making 'model embryos' in both mice and humans. Model embryos until now have been grown in the lab from donated fertilised eggs, but these are hard to come by and governed by strict laws and ethical guidelines. Now researchers in the University of Michigan have used human pluripotent stem cell lines (originally isolated from embryos, but kept and nurtured as clumps of dividing cells in petri-dishes for many years) to make a model embryo that has shown signs of development and organisation in the crucial 7-10 day window. Magdalena and Roland Pease discuss how helpful these will be to understanding crucial early stage pregnancies and as a tool to test drugs, treatments and disease processes. The ethical side of growing human embryos from stem cells is addressed by Stanford University ethicist Professor Hank Greely.

Astronomers have detected water vapour in the atmosphere of a planet called K2-18b orbiting within the habitable zone of a distant star. The lead scientist, Professor Giovanna Tinetti of University College London, talks to Roland about the discovery and what she hopes to explore when a satellite telescope called ARIEL is launched by ESA in around a decade.

And an amateur astronomer has discovered a comet that appears to have arrived from outside our Solar System. This observation follows on from that of Oumuamua which looked like it was an asteroid that had escaped from an exoplanetary system. Roland asks professional astronomers Alan Fitzsimmons of Queens University Belfast and Simon Porter from South West Research Institute in Colorado what they make of the latest interstellar visitor.

(Picture: A set of five embryo-like structures in a microfluidic device developed in the lab of Jianping Fu. The top row consists of “immunostaining” images in which key proteins are tagged with dyes to label different cell types, whereas the bottom row shows standard photos taken through a microscope. Parts of the bottom images were blurred to more clearly show a correlation between the rows. Image credit: Fu Lab, Michigan Engineering)