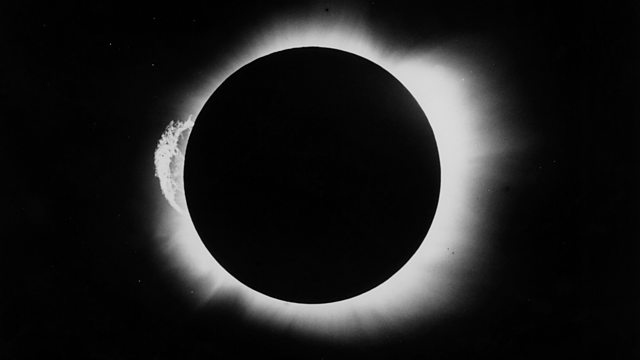 The eclipse that made Einstein famous

100 years ago, a solar eclipse proved Einstein’s theory was onto something. Also, we remember the father of the quark, Murray Gell-Mann, and the origin of apples.

One hundred years ago, a solar eclipse proved Einstein’s theory of general relativity was onto something. Known as the Eddington expedition, in 1919 two teams of astronomers set forth to witness a total solar eclipse from either side of the Atlantic. The photographs, once developed, showed that the background stars, made visible by the moon shading the sun, appeared to be a tiny bit closer towards the sun’s disc than they normally appeared in the night sky. The triumphal announcement was the first new evidence, predicted by Einstein, that large masses in the universe are accompanied by a bending of spacetime, and made Einstein the most famous scientist of the twentieth century. At a special event held by London’s Royal Astronomical Society, where Eddington worked at the time, astronomers and archivists explain more to Science in Action, as does this year’s recipient of the prestigious Eddington Medal, Bernard F. Shutz, who is hoping gravitational waves will point us in the direction of the next big breakthrough in cosmology.

Murray Gell-Mann
A week ago we learned of the death of physicist Murray Gell-Mann. His Nobel prize was awarded exactly 50 years after the Eddington expedition in 1969, for work elucidating the particles now known as quarks. Oxford emeritus prof Frank Close gives his evaluation of Gell-Mann’s influence on particle physics.

Apples were big long before humans
Robert Spengler, of the Max Planck Institute in Jena, spends his time thinking about the evolutionary origins of certain crops we eat every day. His recent work suggests that apples, rather than being bred to be large by human beings, may well have evolved long before that to be big. Human beings’ influence on the domesticated crops we now eat came much later.

The birth of a new volcano