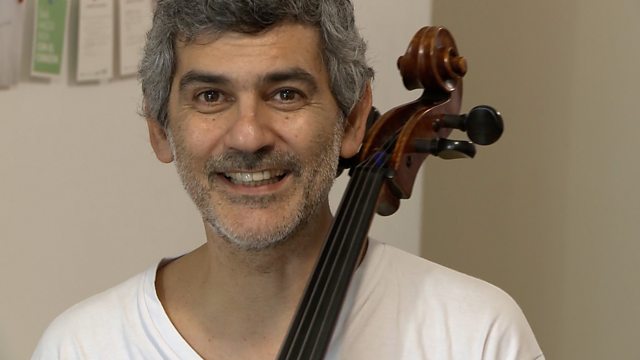 Bringing music to people in pain

BBC Inspirations 2018 nominee Jorge Bergero is the principal cellist at the Teatro Colón in Buenos Aires. He also plays for people in care homes, prisons and refugee camps

All this week at Outlook we’re launching the BBC Inspirations Awards 2020 - and we need your help. We’re asking you to nominate the unsung heroes in your life, so that we might celebrate their inspiring stories.

To get you thinking, today on Outlook we hear from Jorge Bergero – one of our amazing nominees from 2018.

Jorge is the principal cellist at the Teatro Colón in Buenos Aires, one of the greatest concert halls in the world. In his spare time he runs Música para el alma, or, Music for the Soul - an organisation which plays music in care homes, hospitals, and anywhere else where people can't make it to concert halls. The group started when Jorge and some musician friends played for Jorge's partner Eugenia in a health clinic where she was receiving treatment for breast cancer. Jorge described it as an 'epiphany' and returned to play each month at the clinic, and even after Eugenia sadly passed away. Since then, the group has gone on to play at prisons, hospitals and schools - and now has over 2,500 musicians to call on. Two years after his nomination, Emily Webb caught up with Jorge. Música para el alma continue to tour, and have just returned from Colombia - but that's not the only good news...!

Jimena Cruz is an indigenous woman born into a poor rural family in Chile. She grew up hearing the stories of indigenous people and history but was also fascinated by her local museum. It was this background that helped her to solve a 500 year-old mystery in the Atacama desert in the north of Chile. Our reporter Grace Livingstone went to meet her.

Remember - to submit your nomination for the BBC Inspirations Awards 2020, visit: bbcworldservice.com/inspirations. Be sure to check out the terms and privacy notice. Nominations close at 12 GMT on 9 April, 2020.

'I look good - so they don't believe I have HIV'

Once upon a time in Wakaliwood