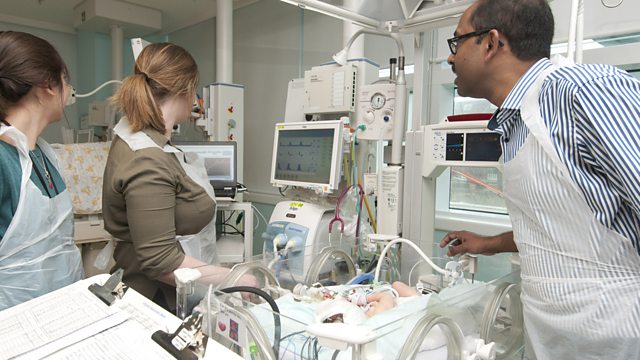 Lighting the brain after birth

Detecting signs of brain injury in newborns; Super biomaterials to fight superbugs; The relationship between breathing perception and the brain; Mirror-touch synaesthesia research

Every year a minority of births goes wrong and the baby is deprived of oxygen, which can lead to long-term brain damage and conditions such as cerebral palsy. Early treatment can reduce the likelihood of permanent disability or even death, so a team at University College London have now developed a new portable device which uses harmless infra-red to detect signs of brain injury in newborn babies, minutes after birth. It is called Cyril and consultant neurologist Subhabrata Mitra and Dr Ilias Tachtsidis, Reader in Biomedical Engineering, demonstrate it to Claudia.

Antibiotic-resistant bacteria are a well-known problem, with one insidious thriving place being medical implants, where they form impenetrable biofilms. But there could be a solution from scientists at Nottingham University. Kim Hardie, a molecular microbiologist, is part of a team that has developed special slippery coatings for biomedical devices, such as catheters, that stop bacteria attaching and sticking in the first place. It is hoped these super biomaterials will help in the fight against super bugs, which has huge implications for infection rates in hospitals globally.

It is estimated that one in nine people experience some form of breathlessness, which is most common in conditions such as heart failure, lung disease, panic disorder and Parkinson’s. But there are also significant numbers of people who suffer from breathlessness which cannot be explained. A team at Oxford University hypothesise this might be driven by networks in the brain. So using brain scans and computational modelling, Breathe Oxford has examined breathlessness in athletes, healthy people and those with chronic lung disease, seeking clues as to why some individuals become disabled by their breathlessness, while others with the same lung function live normal healthy lives.
Claudia discusses this relationship between breathlessness and brain perception with lead researcher and anaesthetist Professor Kyle Pattinson and research scientist Sarah Finnegan. They also, using a ‘Steppatron’, demonstrate what it is like to live with a chronic lung condition.

Mirror-touch synaesthesia is a rare type of synaesthesia where people can actually feel something that they can see being done to someone else. For example they might seem to feel a brush on their hand whilst watching someone else having their hand stroked. Dr Natalie Bowling from the University of Sussex researches this condition. It is estimated that 30% of the population could experience some form of synaesthesia and Claudia also meets Kaitlyn Hova, a violinist with visual-auditory synaesthesia. She demonstrates her violin, which lights up with different colours according to how she sees the notes.

A new unique discovery about Parkinson’s

The small, but increasing risk of stillbirth past term