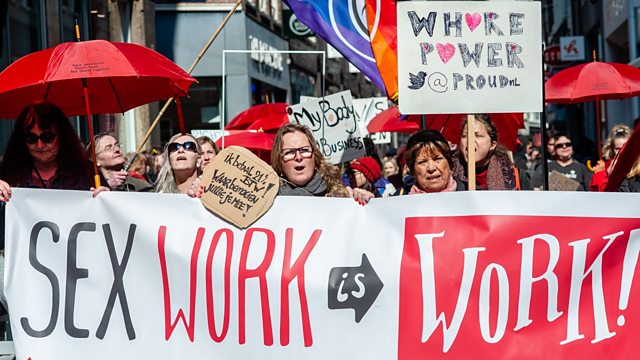 Should prostitution be a normal profession?

What's the best way to help sex workers? We hear the cases for full decriminalisation, versus abolition of what's often dubbed the world's oldest profession.

What's the best way to help sex workers? We hear the cases for full decriminalisation, versus abolition of what's often dubbed the world's oldest profession.

In the Netherlands - a country with some of the most liberal laws on prostitution - a petition is due to be debated in parliament that calls for it to be made illegal to pay for sex. The initiative, spearheaded by young Christians and feminists, has sparked an outcry with many claiming it would actually make life harder for the sex workers it is intended to help, as the BBC's Anna Holligan reports.

It's a controversy we bring back into the BBC studio. Ed Butler hosts a fiery dispute between the British feminist and journalist Julie Bindel, and the Nevadan sex worker-turned-PhD student Christina Parreira, who wants her profession to be treated in law just the same way as any other. Plus Professor Prabha Kotiswaran of Kings College London explains why it doesn't make much difference what the law says, if it is arbitrarily enforced by the police.

(Picture: A group of sex workers and supporters are seen holding a banner during a demonstration in Amsterdam, Netherlands; Credit: Ana Fernandez/SOPA Images/LightRocket via Getty Images)