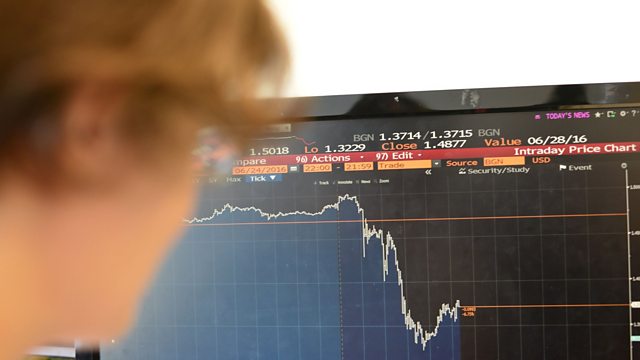 Brexit and the currency speculators

Some traders are betting on the UK crashing out of the EU without a divorce agreement - but should we be concerned that they wield too much political influence?

Some traders are betting on the UK crashing out of the EU without a divorce agreement. Should we be concerned that they wield too much political influence?

Both the British Prime Minister's sister Rachel Johnson, and the former Conservative finance minister Philip Hammond, have publicly voiced concerns in recent day that Boris Johnson is backed by financiers speculating on a sharp fall in the pound following a possible no-deal Brexit on 31 October.

Manuela Saragosa asks how credible are such claims? How are the markets positioned for Brexit? And is there any way of even knowing who is "shorting" the pound, ready to profit from an unexpected fall in its value?

The programme includes interviews with David Riley, chief investment strategist at Bluebay Asset Management, and with Jane Foley, head of currency strategy at Rabobank. Plus the BBC's Edwin Lane learns how to play the foreign exchange markets from Piers Curran of Amplify Trading.

(Picture: A woman looks at a chart showing the drop in the pound against the dollar after the UK vote to leave the EU in 2016; Credit: Daniel Sorabji/AFP/Getty Images)

WeWork and the cult of the CEO

The onward march of Chinese debt