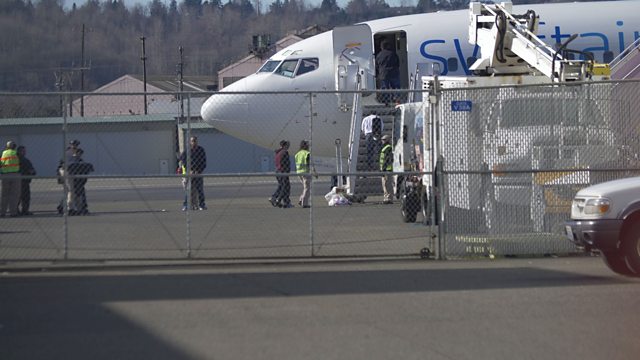 Seattle, Washington, is widely seen as a pro-immigrant city. So many residents were shocked to learn that a nearby airport has been used to deport some 34,000 people in the last eight years. Now King County, where the airport is located, is signalling its opposition to those deportations. We also learn about a subversive hand sign adopted from Hollywood and used in Thailand; we visit a radio program whose signals connect families split between central California and southern Mexico; we meet a teacher who’s helping kids feel proud to communicate in their native tongues; we hear from a man who learned how to deal with a misreading of his name; and we hear the music of a man who won’t yield to pressure to spell it all out.

(Detainees are loaded onto a Swift Air charter flight at King County International Airport (Boeing Field) in Seattle, WA, for a February 26 ICE Air flight. Credit: Still image from video by Alex Montalvo and Wadii Boughdir for the University of Washington Center for Human Rights)

Be you for you