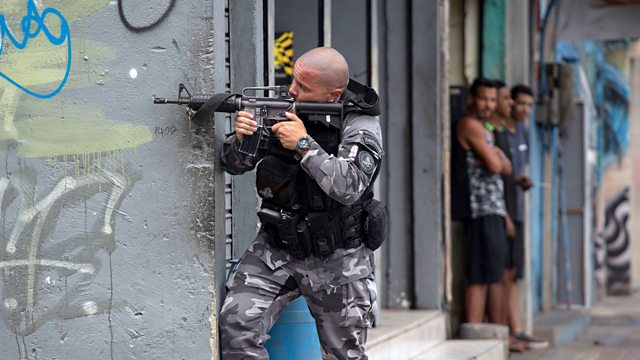 Brazil’s party capital, Rio de Janeiro, is witnessing a killing spree and it’s the police who stand accused of perpetrating much of the bloodshed.

Brazil’s party capital, Rio de Janeiro, is witnessing a killing spree. Nothing new there, you might think – it’s long suffered from violent crime. Yet in this case, it’s the police who stand accused of perpetrating much of the bloodshed. The city’s impoverished informal townships - known as favelas - are home to criminal gangs with whom security forces are doing battle on a daily basis, using armoured vehicles, high velocity firearms and even helicopter gunships. This year an average of five people have lost their lives every single day. Many of the dead are not even lawbreakers, but entirely innocent civilians. For Assignment, Hugo Bachega enters Rio’s favelas to meet those who believe the authorities are complicit in extra-judicial assassinations. But as he discovers, the police themselves are both afraid and ill-equipped for their task, while investigatory authorities freely admit that they are incapable of properly investigating suspected illegal killings. What’s more, plenty of people outside the favelas approve of the hardline police tactics, and sympathy for victims is qualified by the pervading fear of crime.

Marawi: The story of the Philippines’ Lost City