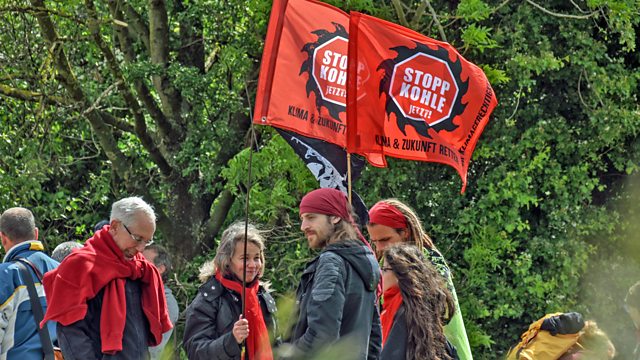 A German forest is disappearing; devoured by a coalmine. The Hambacher Forest has become a powerful symbol of climate change resistance. Can protesters save the last trees?

The beautiful Hambacher Forest is disappearing. Over the past four decades, it has been slowly devoured by a voracious coalmine in the German Rhineland. The forest has become a powerful symbol of climate change resistance. Protesters have been staging a last stand to protect the trees. But they have arrived too late to prevent the demolition of two villages that also stand in the way of the mine’s relentless progress.

Manheim has become a ghost village. Most of the 1600 residents have now moved out. Many of the houses have already been pulled down. But a few people still live there against a backdrop of diggers pulling their village apart. Some are sad that the kart track where local boy Michael Schumacher learned to drive is likely to fall victim to the excavators. And many felt threatened last year by the protesters, in hoodies and face masks, when they moved into to occupy empty houses.

Yet the protesters seem to have the German government on their side. It recently commissioned a report, which recommended Germany stop burning coal by 2038 in order to meet emissions targets. That’s a problem for RWE, the company that owns the mine and nearby power stations. It’s going to keep digging for as long as it can. Tim Mansel joins the protesters for their monthly gathering on the forest edge; meets the villagers who simply want a quiet life, away from the front line; and asks RWE if it will ever stop mining.