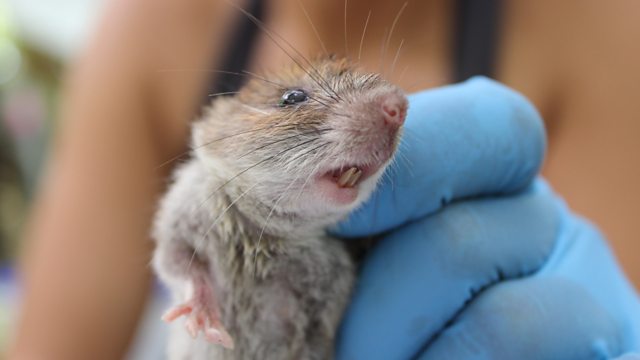 Discovery The Chase
Episode 3 of 4

How scientists are trying to eradicate rats and mosquitoes threatening French Polynesia.

The atoll of Tetiaro is a string of tiny islands in French Polynesia, about 60km away from Tahiti. The islands – known as ‘motus’ to local Polynesians – are unique ecosystems that are crucial nesting sites for native seabirds.

But invasive species threaten to disrupt these fragile environments – a fate seen across many islands in the Pacific.
Rats arrived with early human settlers and have driven bird species off some of the islands. Meanwhile introduced mosquitoes have thrived in the warm conditions, and now act as vectors for diseases such as the Zika virus.

Rat eradication experts have travelled to one of the uninhabited islands in the atoll, called Reiono, to attempt an experimental eradication of thousands of rats with one mammoth poison bait drop. They’re also using this as an opportunity to better understand why eradication attempts have been less effective on tropical islands.

At the same time, on another island in the chain called Onetahi, researchers are releasing swarms of sterilised male mosquitoes to try to rid this motu of the disease-carrying pest.

Join Carl Smith from ABC Australia for the third episode of The Chase: a special four-part series about science on the run.

Picture: The Pacific rat (Rattus exulans) is smaller than many other invasive rat species, but it’s still been linked to localised extinctions of island birds, Credit: Carl Smith

Back from the Dead—The Chase