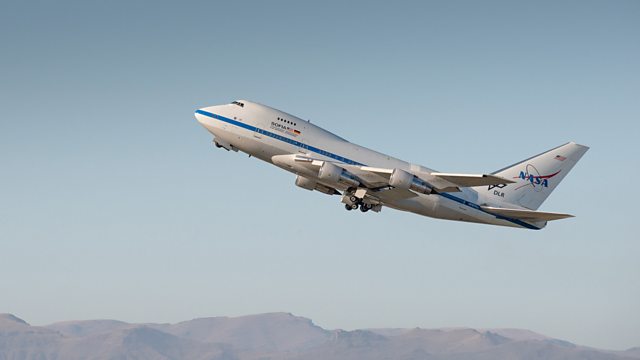 Eye in the Sky

Discovery The Chase
Episode 1 of 4

On this mission, SOFIA is setting out to study Titan, Saturn’s biggest moon, by flying into the faint shadow.

On this mission, SOFIA is setting out to study Titan, Saturn’s biggest moon, by flying into the faint shadow that it casts as it blocks the light from a faraway star. It’s a phenomenon called an occultation, and if the mission succeeds, it will reveal new details about Titan’s atmosphere.

SOFIA is a very unusual observatory. It is a 747 aircraft with a hatch in the side, which opens in flight to reveal a large, custom-built telescope – carefully engineered to work inside a moving jet plane. Its full name is the Stratospheric Observatory for Infrared Astronomy, and it’s a joint project of Nasa and the German space agency, DLR.

The catch? That shadow is moving across the earth at 22 kilometres per second.

Join Dr Jonathan Webb from the ABC in Australia for episode one of The Chase - a special four-part series about science on the run.

(Photo: SOFIA is a heavily modified 747SP which was acquired by Nasa in the mid-1990s after spending 20 years as a passenger jet. (Credit: Wayne Williams)

Back from the Dead—The Chase