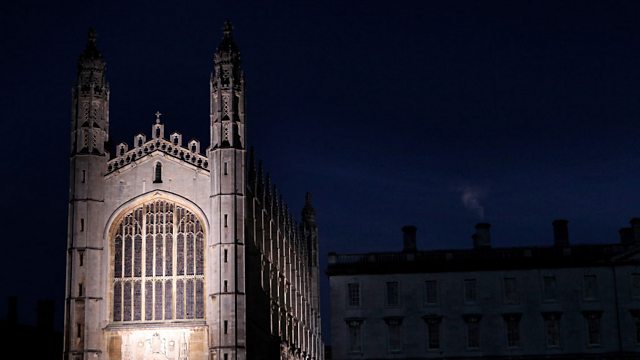 A traditional celebration of Christmas with the annual Carol Service from King's College Cambridge.

For many around the world, A Festival of Nine Lessons and Carols, live from the candlelit Chapel of King's College, Cambridge, marks the beginning of Christmas. First heard on Christmas Eve 1918, it was devised by the Dean of King's Eric Milner-White who, only a few months earlier, had served as an army chaplain. He based the Festival around nine Bible readings interspersed with carols old and new. They are sung by the world-famous chapel choir who also lead the congregation in traditional Christmas hymns. It was first broadcast by the BBC in 1928, with world-wide transmissions beginning in 1932.

A specially-written carol by the composer Judith Weir will be premiered during the Festival this year. A new carol has been commissioned for the Christmas Eve service every year since 1983, so this new work entitled ‘O Mercy Divine’ for choir and cello will be the 36th such carol commissioned by King’s College. Judith Weir is an alumna and honorary fellow of King’s who currently holds the post of UK's Master of the Queen’s Music. The new carol series represents part of a long-standing contribution by the College to contemporary choral writing.

The live broadcast from the Chapel of King's College, Cambridge marks the Festival’s Centenary year.

A festival of nine lessons and carols

See all episodes from A Festival of Nine Lessons and Carols