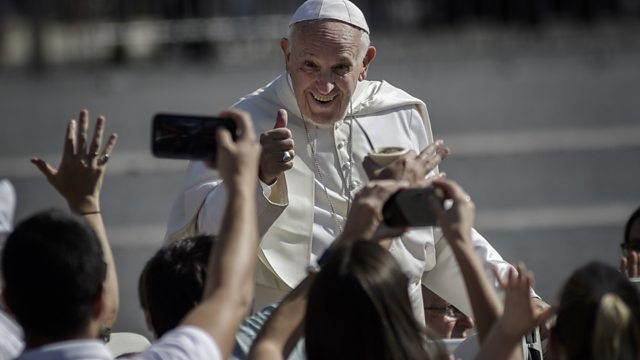 Nuala McGovern is in Rome with young Catholics from across the globe to discuss issues such as sexuality, leadership in the Church, and the role of women.

The BBC’s Nuala McGovern is with an audience and panel of speakers to ask what the next generation of Catholics want from their Church.

We are at the Teatro Flaiano in Rome, for Heart and Soul Gathering, as Bishops from all over the world gather with the Pope at the Vatican for a special meeting, or Synod, on Catholicism and the young.

In March, over three hundred people aged between 16-29, plus fifteen thousand more on social media, came together in Rome, to say what is important to them and their faith. Heart and Soul Gathering continues that conversation and adds to the voices being heard now at the Synod.

We bring together Catholics from across the globe, from countries such as Nigeria, Brazil and Samoa, to discuss their views on issues such as sexuality, leadership in the Church, and the role of women. How should the church engage with its young people? What are the priorities for young Catholics?

This special Heart and Soul Gathering from the BBC World Service is the second programme in a series of faith-based community discussions.

Produced by Louise Clarke-Rowbotham for the BBC World Service.

Marriage in Israel—Heart and Soul Gathering

See all clips from Young Catholics (3)