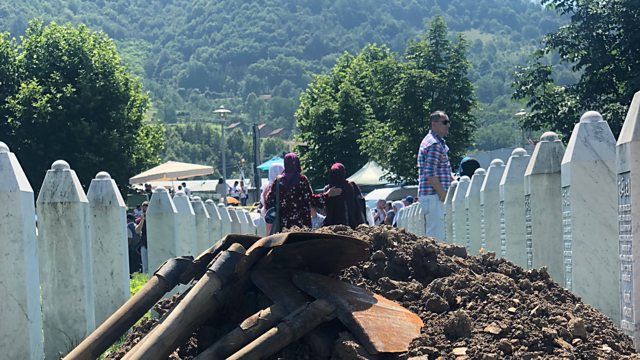 Unearthing the Past in Srebrenica

Thousands were killed in the war in Bosnia. Anna Holligan is at the ceremony where the remains found in the past year are buried

On July the 11th every year, the bodies of those who Sasa helped to identify over the past 12 months are re-buried in a Muslim service and Anna will witness the ceremony at the sprawling Potocari Cemetery and meet the families on a pilgrimage to honour the ones they loved and lost.

Anna Holligan has listened to the details of unspeakable terror as the BBC’s correspondent in The Hague and will travel to the scenes of Mladic’s crimes to meet the Muslim families still haunted by the war of 25 years ago and the massacre of thousands at Srebrenica.

Sasa was four years old when soldiers drove into his home town of Mostar – his family was a mix of Bosnian Muslim and Serbian Orthodox and the war ripped it apart. He is now a translator, and recently worked at the trial of Ratko Mladic.

Samir Chosić is shovelling earth, a job that stirs his own painful memories of fleeing for his life, as thirty-five freshly dug graves readied for fragments of bones to be laid to rest.

An estimated 12,000 people of all faiths, Muslims, Christians, Jews and others are still missing - feared slaughtered - right across this troubled Balkan territory.

As she travels around Bosnia-Herzegovina, Anna witnesses a country officially at peace, but more religiously divided than it was before the war.

Stepping on Bones - Solovki and Russia's Past