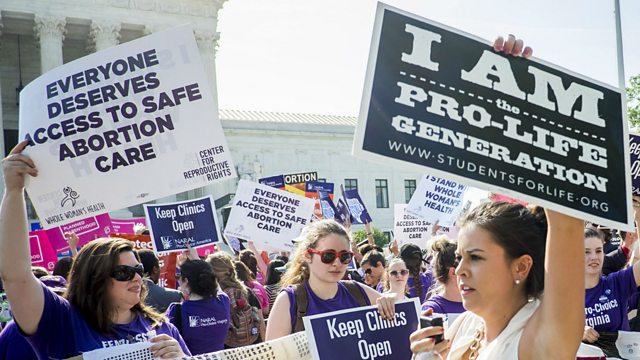 The Compass Abortion in America
Episode 1 of 3

Could abortion be banned in the USA? Philippa Thomas explores the past, present and future of this most controversial debate.

Could abortion be banned in the United States? Since the election of President Trump the question has taken on a new urgency, for both sides of America’s abortion wars. Philippa Thomas travels to two states which perfectly capture the debate – Texas and Kentucky – to explore, the past, present and future of this most controversial debate.

In the first programme Philippa visits abortion clinics in Texas to hear from women who have had abortions, and protesters who would like to stop them, about why this issue is so important. She hears from a doctor who performs abortions, a state lawmaker who would like to stop him, and an activist who wants to remove the shame about abortion. In the state capital, Austin, Philippa meets Sarah Weddington, the lawyer who argued the famous Roe versus Wade case which made abortion legal across America, and she hears how the reaction against that judgement helped create modern conservatism, modern liberalism, and elect President Trump.

Excerpts from Sarah Weddington’s oral argument in the Roe versus Wade case are provided by Oyez, a free law project by Justia and the Legal Information Institute of Cornell Law School, at www.oyez.org.