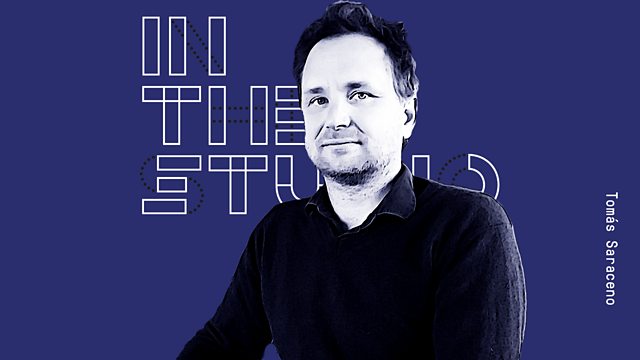 Argentinian artist Tomás Saraceno talks about his community project Aerocene, which is made up of sculptural solar balloons that ascend and fly without the use of fossil fuels.

If you think of an artist's studio you might picture a room, bright with light and splattered with paint. You must forget that image when you visit the Argentinian artist Tomás Saraceno. His studio is two big and old industrial units, covered in graffiti, in what was East Berlin. This was where the company AGFA developed and made the chemicals that made colour photography possible. The ground is so polluted Saraceno's lease forbids him from growing any vegetables - and this matters to this environmentally concerned artist. But the industrial past of Studio Saracen is fitting as Tomás’ work is highly technical. Here he has an architecture department, an arachnid research laboratory and an engineering works. He has about 40 people working on different projects.

The project preoccupying Tomas at the moment, he calls Aerocene - sculptural hot air balloons that ascend and fly without the use of any fossil fuels, by capturing the reflected heat of the sun. He talks to the BBC’s Julian May as he is working on an installation for Miami Beach to demonstrate this. Tomas's ambition is to create a kind of slow aviation, in which his balloons will travel around the globe on predictable air currents. That might sound far-fetched but the Massachusetts Institute of Technology and Nasa are interested, and working with him.