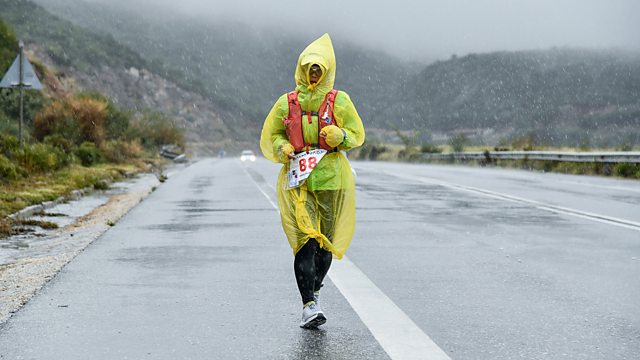 What are the limits of human endurance?

CrowdScience joins a 246km running race in Greece, and meets the athletes pushing against the limits of human endurance

When it comes to speed, humans have got nothing on cheetahs - or greyhounds, kangaroos or zebras for that matter. It’s over long distances we really come into our own: when running for hours or even days, our body structure and excellent sweating skills make us able to outpace much faster mammals.

But what are the limits of human endurance? Can we run ever further and faster, and what’s the best diet to fuel such ambitions?

This week’s questions come from two CrowdScience listeners in Japan who already know a fair bit about stamina, having run several marathons and long-distance triathlons between them. We head to Greece, legendary birthplace of the marathon, to witness an even more arduous challenge: hundreds of athletes following in the footsteps of the ancient Greek messenger Pheidippides, to run an astonishing 246km across the country. The ever-so-slightly less fit CrowdScience team do our best to keep up, and try to discover the secrets of these runners’ incredible endurance.

(Photo: a runner in the Spartathlon ultramarathon, with kind permission from the International Spartathlon Association)

What Makes Us Superstitious?

See all clips from What are the limits of human endurance? (2)