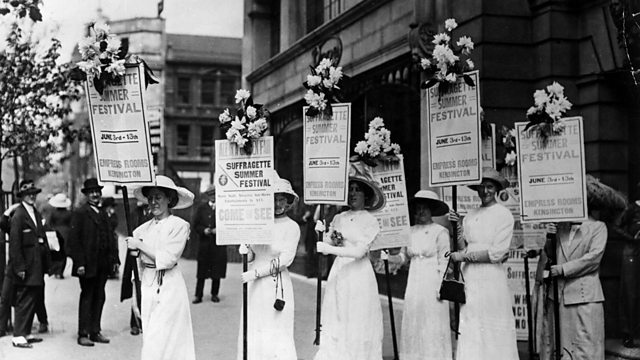 The Lost World of the Suffragettes

In the 1970s, historian Sir Brian Harrison embarked on a huge project to record the experiences of women who had been part of the UK suffrage movement in the early part of the 20th Century.

Now in the 100th anniversary year of women in Britain finally being granted the vote, journalist Jane Garvey listens through some of the 205 tapes to get an idea of their lives as well as the risks and sacrifices the women made in their fight for equality. Recordings include graphic testimony from women who were beaten by police and force fed while on hunger strike in prison.

There is discussion around protests including women chaining themselves to railings, disrupting Conservative and Liberal rallies and in some cases blowing up post boxes and politician’s homes

The programme looks at the splits in the movement between those who favoured militant tactics - suffragettes like Emeline Pankhurst and those who followed more peaceful forms of protest and political persuasion - suffragists like Millicent Fawcett.

We hear how the role played by women on the Home Front in World War One helped their campaign and how two suffragettes were sent to Moscow by British Prime Minister David Lloyd George to persuade the Russians to stay in the war.

Jane also looks at what some of the women went on to do with their lives after the vote was won and their attitudes in later life to late 20th Century feminism.

(Photo: 1 May 1913: The start of the suffragettes Summer Festival at the Empress Rooms in Kensington. Credit: Hulton Archive/Getty Images)

The Swedish Ambassador's Guide to Britain