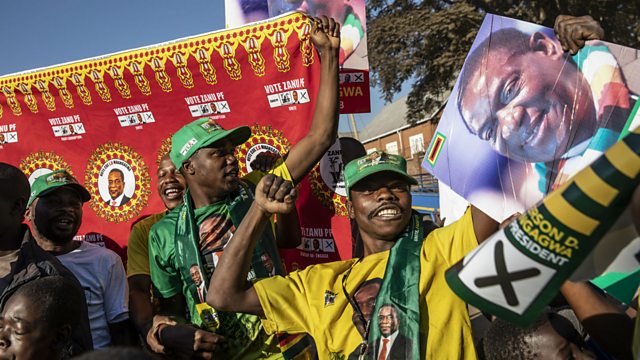 What does the future hold for Zimbabwe, its people and its culture?

Following Zimbabwe’s historic elections The Cultural Frontline asks what the future holds for Zimbabwe, its culture and its people.

How do you make sense of a history unspoken? The writer Novuyo Rosa Tshuma discusses The House of Stone, her new novel that explores the tragedies and the conflicts of Zimbabwe’s past.

Now the vote is over, what comes next? The Chief Curator of the National Gallery of Zimbabwe, Raphael Chikukwa and the celebrated poet and singer, Albert Nyathi reflect on the elections and share their vision of how Zimbabwe can find a new purpose and identity through the power of arts and culture.

For nearly 40 years Zimbabwean life and culture was dominated by the image of one man, former President Robert Mugabe. The author Panashe Chigumadzi reflects on the omnipresence of Mugabe’s portrait and asks whether Zimbabweans can now find a new image to represent their nation.

Plus have you ever heard Chimurenga music? The musician Hope Masike explains how Zimbabwe’s music of protest has unified the country from the struggle for liberation to the new post-Mugabe era.

Speaking Up for Survivors through Art