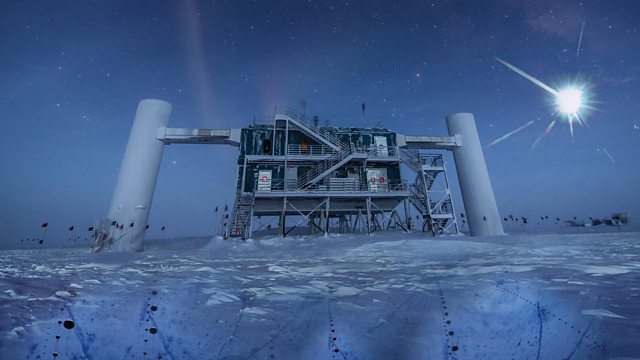 An international team of scientists has discovered a flaring blazar in a far off galaxy. The astronomical phenomenon is releasing high energy neutrinos. It was traced by an icebound neutrino detector situated a mile under the South Pole at the IceCube Neutrino Observatory with the help of telescopes from around the globe. Until now, the sun and a nearby supernova were the only sources of these neutrinos. Dr Naoko Kurahashi Neilson joins Science in Action to explain the findings.

VR molecules
Roland Pease is guided through a virtual reality world full of molecules by the creator, Dr. David Glowacki from the University of Bristol.

Early Humans in Asia
Archaeologists in China have ‘peeled back’ 17 layers of sediment and fossil soils formed during a period spanning almost a million years. They’ve revealed stone tool fragments and animal bones at the site in Shangchen in the southern Chinese Loess Plateau. Prof John Kappelman tells Science in Action about a Chinese team that has dated the discoveries and finds that the timing of when early humans left Africa and arrived in Asia is earlier than previously thought – now over two million years ago.

Underwater pollution
The ocean seems like a very vast, and very quiet place. Dip under the water, and you might find yourself in a big, blue, silent world. Really, it's anything but. The sea is full of rumbles, bubbles, chirps, grunts and clicks. Unfortunately, man-made sounds are increasingly becoming part of this cacophony; the din from boats, drills, pings of motors and blasts from seismic surveys. All this noise is polluting our seas and damaging the underwater environment, as Madeleine Finlay reports.

Bringing Back the Northern White Rhino