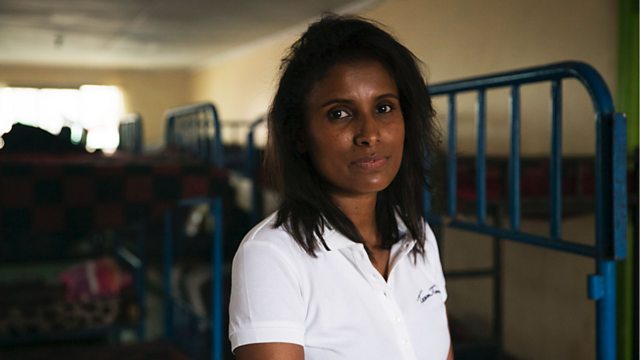 The Stranger Who Rescued Me

Rukhiya Budden says she suffered terrible hardship and misery when she was growing up in a Kenyan orphanage. Her life was changed when a Japanese stranger stepped in to rescue her

Rukhiya Budden says she suffered abuse and misery when she was growing up in an orphanage in Nairobi. But her life was changed when a Japanese stranger became like a surrogate father to her. Tomiji Minagawa took her in, giving her a loving home. Rukhiya is a Global Ambassador for Hope and Homes for Children and she campaigns for orphanages to be abolished.

When a large ship runs into problems at sea, there is a good chance its recovery will be led by Nick Sloane. He is a salvage expert based in South Africa. His job is to save as much of the ship and its cargo as he can. He tells Outlook's Gavin Fischer what this entails and the personal toll this adventurous lifestyle takes.

Alex Honnold is a rock star in the climbing community. On 3 June 2017, he climbed El Capitan - a daunting 3,000 ft (914m) rock formation in Yosemite National Park, California - without any safety equipment. Outlook's Emily Webb spoke to Alex about how he managed it and about the documentary Free Solo that tells the story of this extraordinary feat.

(Photo: Rukhiya Budden visiting the orphanage where she grew up. Photo credit: Hope and Homes for children.)

The Love That Survived IS