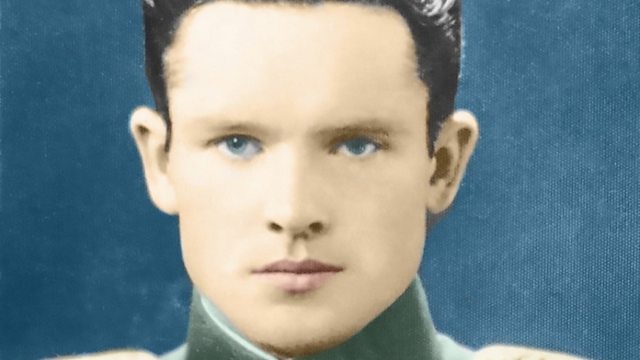 The truth about my ‘hero’ grandfather

Silvia Foti's grandfather was seen as a war hero in Lithuania, but a chance conversation on a trip there made Silvia question everything she'd learnt about him and about her past.

Growing up in the United States, Silvia Foti couldn't have been more proud of her Lithuanian heritage, in particular her grandfather. Silvia's family had crossed the Atlantic after the Second World War but she always knew that, back in Lithuania, her grandfather was seen as a war hero. She'd been told that he'd been executed at the age of 37 for standing up to the Soviet regime and trying to lead a rebellion against their occupation of Lithuania. Silvia tells Emily Webb how a chance conversation on a trip to Lithuania made her question everything she'd learnt about her past.

We're marking Valentine's day on Outlook with the heart-warming story of the young British couple who met on their daily commute into London. It all started back in 2004 when Zöe Folbigg used to travel by train from a town called Hitchin into the British capital. While waiting on the platform for the 8.21, she spotted a handsome stranger and eventually plucked up the courage to ask him out for a drink.

Thet Su Htwe is something of a pioneer in Myanmar. She's a doctor by training but, these days, she's not practising medicine. Instead, she travels around her native Myanmar talking to people about sex: men, women, young people, old people. It's a bit of a taboo subject in the country and so she has to tread carefully during her sessions. In addition to that Thet Su is a Muslim woman and her husband is a religious scholar. She tells Emily Webb about some of the reactions she gets.

My son’s death was ‘absolutely beautiful’

The secrets behind my Disney songs