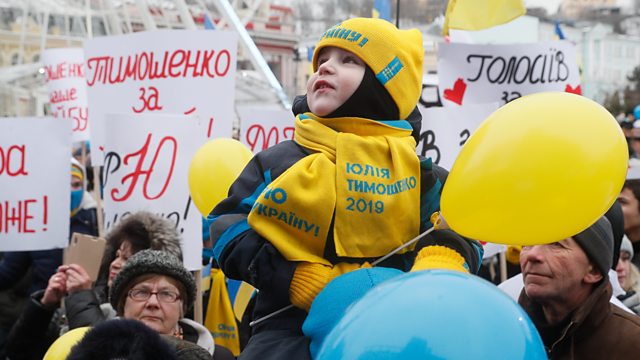 Jonah Fisher meets some of the more perplexing characters vying to be Ukraine’s next president. Pascale Harter introduces this and other stories from around the world.

Pascale Harter introduces correspondents' stories, insights and experiences from around the world.

Pascale Harter introduces correspondents' stories, insights and experiences from around the world. As Ukraine prepares for an election next month, Jonah Fisher meets some of the more perplexing characters vying to be the country’s next president. Ukraine’s incumbent Petro Poroshenko’s popularity has taken a big hit in recent years. He won the presidency in a landslide 5 years ago, promising to bring peace and end corruption. But the country is still at war with Russia, and Ukrainians feel that corruption remains a big problem. They will get to choose between 44 candidates on what will be a very long ballot paper, including a comedian and a man whose surname is exactly the same as one of the frontrunners.

Kenya has been home to the Dadaab refugee camp for almost 3 decades. It was set up for people escaping Somalia’s civil war. To this day Somalians are still fleeing violence in their country. Some people in the camp are third generation – born in Dadaab, to parents who were born in Dadaab. Sally Hayden meets some of the camp’s refugees, including a mother who was paid by the UN to return to Somalia, only to driven back over the border again after a bomb blast near her home.

On the Karakorum Highway, Chris Haslam sat down to talk business with the driver of one of Pakistan's famous painted trucks - the elaborately-decorated palaces on wheels which haul goods and passengers along one of the highest-altitude roads in the world. But times are changing for them, with competition from "vast Chinese behemoths" now plying the same route as part of the Belt and Road expansion.

And amid deforestation and dwindling insect numbers around the world, Emilie Filou has a rare tale of revival from Madagascar - with the story of how one NGO has brought back the art of weaving a special kind of silk, made not by worms but by a unique local moth.