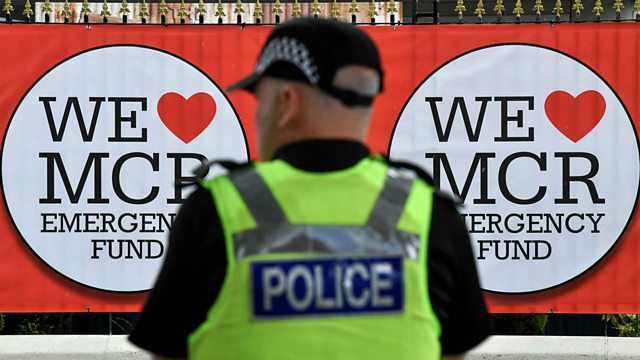 Being Muslim in Manchester - One Love?

Six months after the arena attack, Athar Ahmad goes on a journey with two Manchester Muslims to find out if #One Love glosses over a rising trend in religious hate crimes.

Baktash Noori is a 23-year-old practising Muslim Mancunian YouTube vlogger. He lives just five minutes drive from the Manchester Arena where, six months ago, 22 people were killed by suicide bomber. In the days after the attack his parents were warning him to stay off the streets, worried that the colour of his skin and his faith would make him a target for attack. Instead Baktash took to the Manchester streets, blindfolded, with a cardboard sign inviting people to give him a hug. Scared of the reaction right up until the minute he covered his eyes, he says he did not receive a single negative comment. The video he posted has been viewed nearly a million times. He received 5,000 positive emails in three days and had to switch his phone off because his social media notifications were buzzing non-stop.

Abdullah Rashid Vavdiwala was one of the many Muslim taxi drivers who also hit the headlines in the hours and days after the bombing for giving free taxi rides to anyone stranded in the wake of the bomb. Both are men of faith who personified the ‘We Love Manchester’ spirit.

For Heart and Soul, Athar Ahmed takes a trip round the city six months on from that horrific night with Baktash behind the microphone and Abdullah at the wheel.

They talk to 93-year-old Renee Black – the Jewish representative on the Blackburn Interfaith Initiative – whose tears in Albert Square as she stood next to her friend Sadiq Patel summed up the interfaith community’s response and became one of the iconic images of the city’s shared grief.

They also discuss whether faith can withstand such a terrible tragedy with Gibran Awan and his two sisters who were at the arena for the Ariana Grande concert on the night of the attack.

And they visit the Villa Road mosque in Oldham, fire bombed in the hours after the attack, to explore whether the ‘One Love’ response represents the real heart and soul of Manchester or is it a convenient veneer hiding the more unpalatable truth about our suspicions about Muslims and the knee-jerk association with terrorism.

Jesus Lived in the Townships