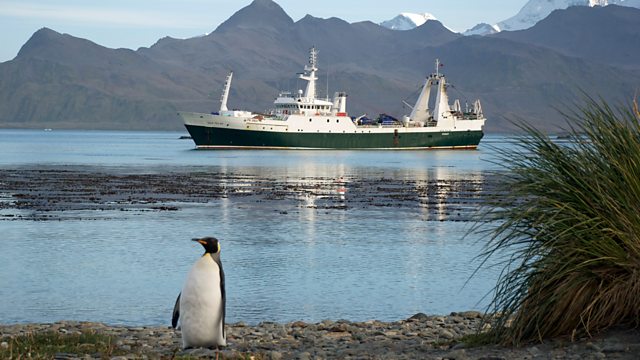 The Compass Ocean Stories
Episode 3 of 4

As the ice of the Arctic and Southern Oceans melts, its composition changes completely and predators have to move further north to find different prey.

3/4 As the ice of the Arctic and Southern Oceans melts, its composition changes completely. Ships can now sail through the Arctic from China to Europe; seals, walrus and polar bears have to move further north and find different prey.

In the third edition of our series on the world’s oceans we visit Svalbard and Alaska to discover what change means for the people of the Arctic as the warming climate brings more trade, more tourists and new species. In the Norwegian territory of Svalbard residents find the doors and windows of their homes warping as the permafrost melts. In Alaska the traditional Inuit freezer cabinets - essentially deep holes cut into the ice - no longer keep whale meat fresh through the summer.

The Southern Ocean, wrapped around a vast frozen continent, faces the same warming trends but here the witnesses are penguins and the scientists who monitor them, fishermen and the toothfish and krill that are increasingly easy to catch for a hungry world.

Beneath the waves, oceanographer Jon Copley from Southampton University provides a fascinating underwater commentary, demonstrating how the Southern Ocean can lay claim to being the ‘mother of all oceans’.