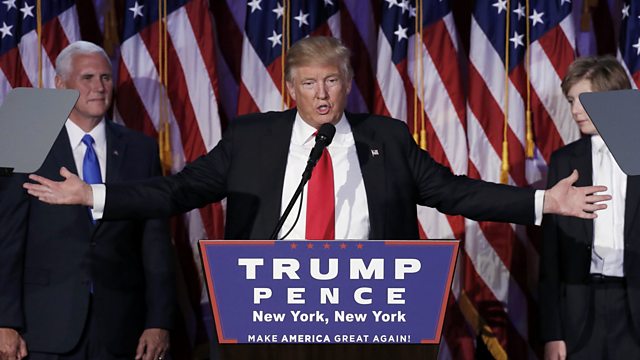 On 8th November 2016 Donald Trump celebrated a remarkable Presidential election victory – Anthony Zurcher revisits that dramatic night – and asks could he do it again in 2020?

Donald Trump celebrated a remarkable Presidential election victory a year ago on 8 November 2016. Anthony Zurcher revisits that dramatic night – and asks could he do it again in 2020?

On the night of 8th November, Democrats were gathering for a huge victory party in New York’s Javit’s Convention Center, anticipating that Hillary Clinton would make history and become the first woman to be president of the United States.

Meanwhile in Trump Tower, Donald Trump’s election team had gathered. On the television networks, pundits and pollsters were waiting for results to come in.. But after initial exit polls favoured Clinton, events took an unexpected turn.

So could Donald Trump repeat this in 2020 and win re-election? Anthony asks some pivotal questions and hears from Susan Glasser, chief international columnist with Politico; from Clinton aide Amanda Litman about the organisation she has set up in reaction to the election defeat; from Sebastian Gorka about the enduring relationship that Donald Trump has with his loyal supporters.