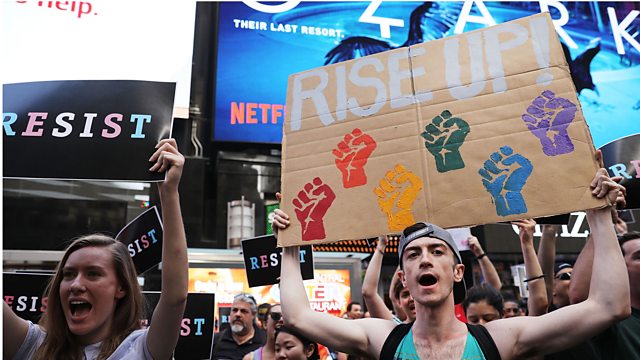 The Compass America, Laboratory of Democracy
Episode 4 of 4

The insurgent popular movements that changed America's democracy from the Tea Party to Civil Rights and same-sex marriage.

4/4 American democracy can easily frustrate change. The country’s Constitution is almost impossible to amend. The many interest groups swirling through Congress often paralyse or colonise it; and corralling 50 states is often beyond the capacity of the most able president.

Yet America has been home to a string of popular movements across the last two centuries that have brought vigour and change to what otherwise might have been a sclerotic political system. It mattered, of course, that the country was born in revolution, meaning that popular resistance, beginning with the original Tea Party in Boston Harbour, is part of the nation’s DNA. We encounter the passion of America’s insurgents and the turbulence their movements generated.

We begin with the struggle by African-Americans to end slavery. We continue with the titanic battles between labour and capital in the 1930s over the rights of workers and the obligations of government to regulate the economy in the public interest. And we conclude with an exploration of two 21st-Century movements: the modern-day Tea Party and the campaign for gay rights and same-sex marriage. We hear from veterans of these struggles in Ohio, California, Michigan, and New York; with museum curators in Cincinnati and Boston who are preserving and interpreting the history of past struggles; and with historians and other experts who can help us to make sense of the successes and failures of these movements, and of their role in sustaining, convulsing, and changing American democracy.