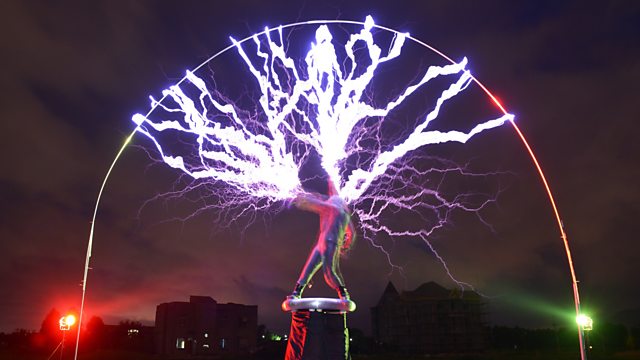 The extraordinary life and prophetic inventions of the Serbian-American engineer Nikola Tesla.

The extraordinary life and prophetic inventions of the Serbian-American engineer Nikola Tesla. Bridget Kendall and guests discuss not just Tesla's key contributions to the design of modern electrical appliances and systems but also his dream of a worldwide system of free wireless electricity, his ambitious scheme to build huge towers to make it happen and why in 1917 his plans and the first tower at Wardenclyffe near New York City came crashing down.

Bridget is joined by Jasmina Vujic, Professor of Nuclear Engineering at Berkeley, University of California, and a Vice President of the Tesla Memorial Society of New York; Jane Alcorn, the President of the Tesla Science Center at Wardenclyffe; and Michael Krause, a historian, writer and director of the documentary All About Tesla.

Photo: A Tesla Coil in action. The man in the photo is wearing a specially designed ferroalloy metal suit which keeps him safe while the high voltage crackles from him.(Getty Images)