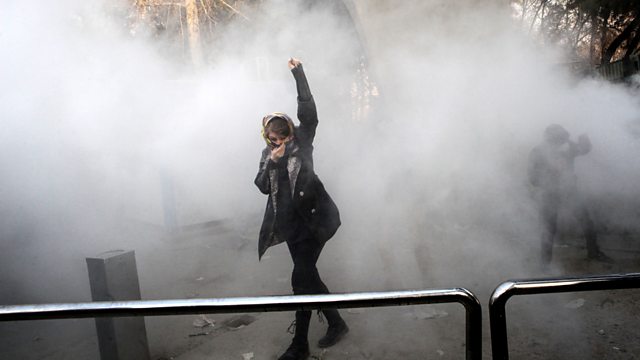 The Cost of Eggs or Political Freedom?

Protests in Iran have left many, including Iranians, confused. Are they about rising living costs, or political leaders? The disparate demands are mirrored in the widely varying slogans heard on the streets. BBC Monitoring's Arash Ahmadi and BBC Persian's Roja Assadi have been watching events.

Bogota stratification
In the Colombian capital Bogota neighbourhoods are ranked one to six according to wealth. The system was intended to make affluent residents subsidise the poorer, but instead it has unwittingly caused a class divide. BBC Mundo's Beatriz de la Pava, who grew up in Bogota, explains.

Indian voices from the First World War
The British Library holds several recordings of soldiers from South Asia who fought for the British during the First World War. One of them, Punjabi soldier Mall Singh, was taken prisoner by the Germans in 1915, and they used the latest technology to record his voice. Ishleen Kaur of BBC Hindi tells the story behind the recording.

Venezuela's pork revolution
It was dubbed the "pork revolution": hundreds of Venezuelans out on the streets over Christmas and New Year when the subsidised pork promised by President Maduro failed to materialise for the seasonal feasts. Rafael Chacon of BBC Mundo is from Venezuela and has been following the story.

Who are you calling "bint nas"?
The Arabic expression "bint nas" recently appeared in a tweet about American pop star Taylor Swift. It began in medieval times as a term for slave girls whose parents were unknown, but over the centuries, the meaning changed completely. Egyptian writer Marwa Mamoon explores the story behind "bint nas".

Kenya's night bus ban
Thousands of Kenyans had their travel plans disrupted by a sudden ban on night buses, imposed on New Year's Eve after the latest in a series of fatal accidents. Judith Wambare of BBC Swahili is a fan of the night buses, and explains issues behind the current ban.

Naming Names on the Fifth Floor