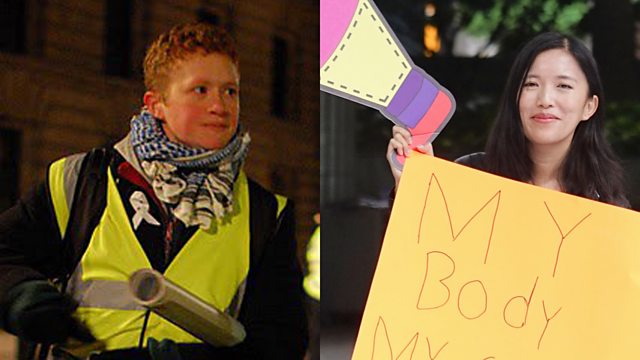 Krupa Padhy talks to two women who organised street protests to draw attention to violence against women and victim blaming.

Marching with fellow women for a cause - Krupa Padhy meets two women who have tackled violence against women head-on, by organising eye-catching and sometimes controversial street protests.

Finn Mackay is one of the UK's most influential feminist activists. She founded the London Feminist Network in 2004, the same year that she revived the Reclaim the Night marches, after seeing shocking statistics on violence against women. The marches are women-only, something Finn believes is important, but she says men are welcome to make the tea and take a back-room role. She is currently a Senior Lecturer at the University of the West of England, Bristol.

Angie Ng is a Chinese-Canadian feminist activist who founded SlutWalk Hong Kong to protest against sexual violence and victim blaming. She recognises that many view the term 'slut' as degrading, but she wants to problematise the word, rather than reclaim it. Angie says that in Hong Kong there was a pervasive view that sexual violence and street harassment was largely a western, 'foreign' problem, but she wanted to show that it happened in their culture too. Angie is currently writing a book based on her research into women and the sex trade.

See all clips from Women Reclaiming Their Streets (2)