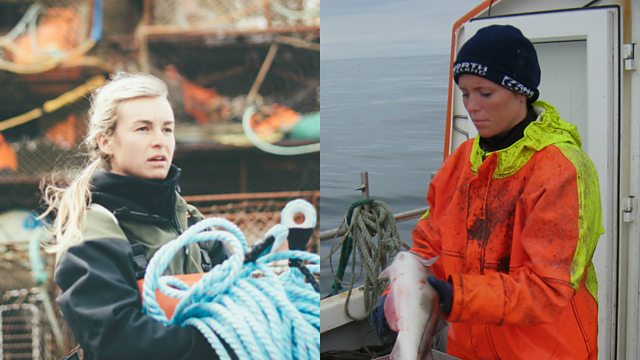 Braving rough weather and long hours at sea, all while hoisting heavy loads of fish - it's not easy being a fisherwoman, but for these women it's about much more than the catch.

Braving rough seas to make a living - it's not easy being a fisherwoman, but for our two guests it's about much more than the catch. They talk to Kim Chakanetsa about working in the open air, forming unique bonds with their crew and about their hopes for a sustainable future of fishing.

Claire Neaton is one half of Salmon Sisters, a commercial fishing and nautical clothing company, based in Alaska. She and her sister Emma grew up in the remote Aleutian Islands in Alaska, and learnt to fish at their father's side. She says their unusual upbringing taught them to be self-sufficient and to value their family ties - and that protecting and maintaining the pristine conditions around Alaska's waters is her top priority for the future.

Steinunn Einarsdottir is a fisherwoman based in the remote north-west of Iceland. Her parents were both at sea when she was a child, and she had to fend for herself when they were away. For many years, she has fished year-round, which is rare for women in Iceland, but now she's had her second child she's working in fish farming. She hopes to get back to life on the waves when her children are a little older, despite the fact that it always makes her seasick!

Women Behind the Lens

See all clips from Fisherwomen (2)