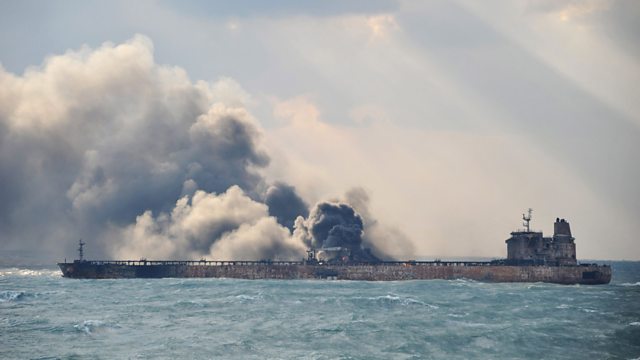 Oil Spill in East China Sea. Also, monitoring our gut gasses with an internal sensor, chimpanzee relatedness and why flowering plants became so successful, so rapidly

At the time of reporting, Sanchi, the oil tanker which collided with a cargo ship off the coast of China on Saturday, is still burning. The tanker contained about a million barrels of ‘condensate’ – a very light crude oil. Initial concerns are, of course, for the 32 crew unaccounted for, but longer term environmental damage from this toxic fuel could be serious, especially if the ship breaks up.

Gut Gas Detecting Electronic Capsules
Gases produced in the digestive tract (from mouth to anus) can tell us a lot about the activity of essential and harmful bacteria in the gut and consequently about our health. Ingestible sensors (capsules that you swallow), which then detect gases throughout the alimentary tract, are now being trailed in humans as a powerful tool for monitoring human health.

Chimp-Facial Portraits
A new citizen science project is being launched at the end of the month exploring relatedness in chimpanzees. In humans it seems like there is a (fairly robust) trend towards looking like your father early in life, perhaps because being recognised is important and there is little doubt about who the mother is. When it comes to chimps it is even more interesting because fathers commit a lot of infanticide- great to look like your Dad if he's a big alpha male, but you are essentially broadcasting to all the other males that you are not theirs!

The Rise of The Flowering Plant
Darwin had an ‘abominable mystery’ – he couldn’t work out why flowering plants, after they evolved in the Cretaceous, suddenly became so varied and widespread. This went against his ideas that evolution happened slowly. It turns out that flowering plants (angiosperms) evolved very early to shed unnecessary genes and therefore reduce their genomes and cell size, which meant they could pack a lot more functionality into their leaves and out-compete their non-flowering neighbours.

(Photo: The burning oil tanker Sanchi at sea off the coast of eastern China, Credit: Transport Ministry of China/AFP)

The Galaxy's Most Peculiar Flickering Star