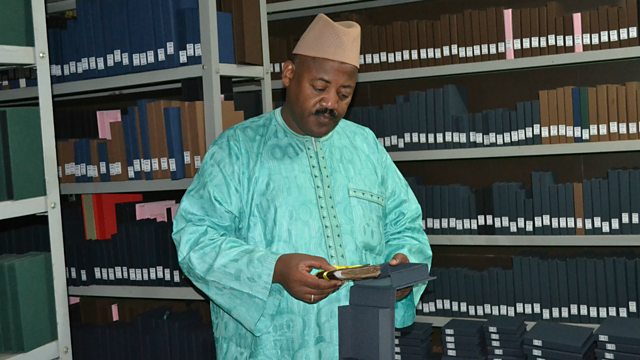 Risking My Life to Save Precious Books

When Islamist militants took control of the Malian city of Timbuktu in 2012, Dr Abdel Kader Haidara feared for his life, and for his collection of rare and precious books. He tells us how he managed to save over 300,000 ancient manuscripts - a record of Mali's history - by putting them in metal boxes and smuggling them out of Timbuktu. Father Columba Stewart, a Benedictine monk from the Hill Museum and Manuscript library in the United States tells us how he was able to help Abdel.

Mariachi and heavy metal aren't an obvious musical match... but both of these musical genres have inspired a band called Metalachi. The group plays arrangements of heavy metal songs in a Mexican mariachi style, and say they're the first to do it. Using their stage names, they've been telling Outlook how Metalachi came about.

Aaron Fowler has been called one of the most important artists of his generation. His pieces are huge in scale and he mixes painting with sculpture, often showing the lives of his friends and family, sometimes in rather unexpected situations. His artworks have been exhibited in Los Angeles, and right now in London's Saatchi Gallery.

There's a long tradition in Bangladesh of fishing with otters. It's been passed down from father to son for centuries, but it's in decline. This is not good news for the otter population in Bangladesh - because otter fishing plays an important role in their conservation. Outlook's Candida Beveridge has been to meet one of the fishermen who still works that way.

Why My Family had to Disappear