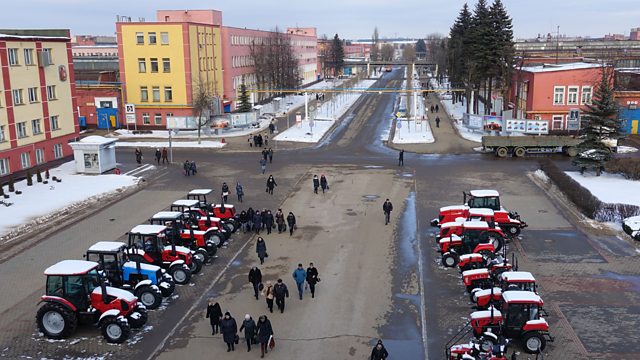 The Minsk Tractor Works provides jobs and cradle-to-grave social care for tens of thousands of Belarussians. Can its Soviet-era model survive the latest phase of capitalism?

The vast Minsk Tractor Works in Belarus was famed all over the Soviet Union. And it's still making tractors. Raging capitalism in the 1990s closed down hundreds of state-owned factories. But Belarus kept open this complex providing not only work but cradle to grave care for tens of thousands of Belarusians. Clinics, nurseries and holiday camps formed an industrial megapolis within a city.

Despite its huge workforce, original buildings and old technology, the Minsk factory is finding new markets world-wide as well maintaining social provision for its workers. But how is this behemoth coping with the challenges of the 21st century and the changing economic landscape of modern Belarus? We go inside the factory to meet the workers and contrast their world with that of Belarus's newest industries - state of the art IT and video gaming companies.