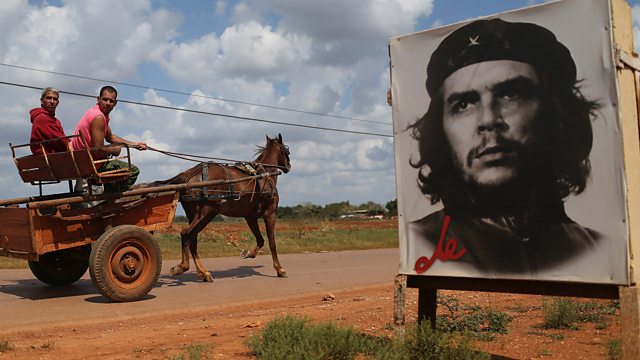 Fifty years after his death, what would Che Guevara have thought of today’s Cuba?

This year marks the 50th anniversary of the death of Ernesto ‘Che’ Guevara. His face can still be seen all over Cuba. For the Cuban Government, he is a symbol of rebellion and revolution, an icon of socialism and sacrifice.

A doctor from Argentina, Guevara fought in the Cuban revolution and became a member of the government. But he left to spread socialist revolution first in the Congo, then in Bolivia where he was executed by a soldier on 9 October 1967.

The Cuba Guevara left behind has gone through big changes in recent years. Relations with the United States, what Che called the 'great enemy of mankind', have improved and private enterprise is on the rise. Has Che Guevara's legacy stood the test of time?

Will Grant, BBC's Cuba correspondent, meets Guevara's daughter Aleida, also a doctor, and his son Ernesto who runs a motorbike tour company taking tourists round the island to sites associated with his father. Men who fought and worked with Guevara talk about the future of the revolution. Is it in safe hands?

Young Cuban singer, Silvito Rodriguez, son of singer Silvio Rodriguez, left Cuba to live in Miami. But fashion blogger Migue Levya and the owners of design store Clandestina are determined to stay and create new opportunities. Five decades after his death, how important is El Che for young Cubans today?

(Photo: A poster of Revolutionary hero Che Guevara is seen next to the road a day after diplomatic talks to restore diplomatic relations between the US and Cuba, 2015. Credit: Joe Raedle/Getty Images)

The Fish that Ate Florida

Aymara and the Ants