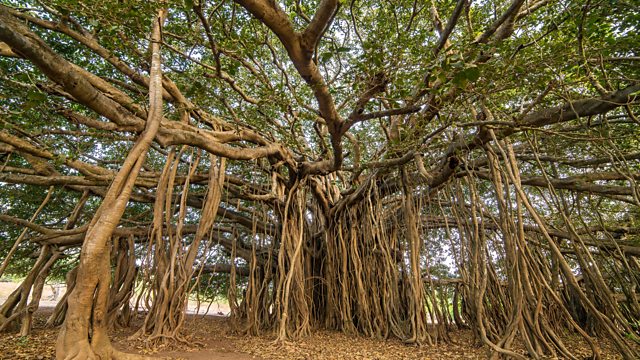 Heart and Soul The Tree Spirits
Episode 2 of 2

Hinduism's sacred tree Thimmamma Marrimanu is believed to aid childless couples with fertility and is part of an annual festival that worships god Shiva.

Anna Lewington reports from the world's biggest tree, that has branches covering a remarkable five acres. This tree, sacred in Hinduism, is called Thimmamma Marrimanu, and stands in Kadiri, in Andhra Pradesh. At the centre of this network of trunks and branches stands a small temple which holds the story of Thimmamma, who threw herself on the funeral pyre of her dead husband. Local people believe that childless couples will become fertile if they worship at the tree. Every year this banyan becomes the focus of a theatrically staged 'journey' or jatara, as part of the annual festival of worship of the god Shiva.