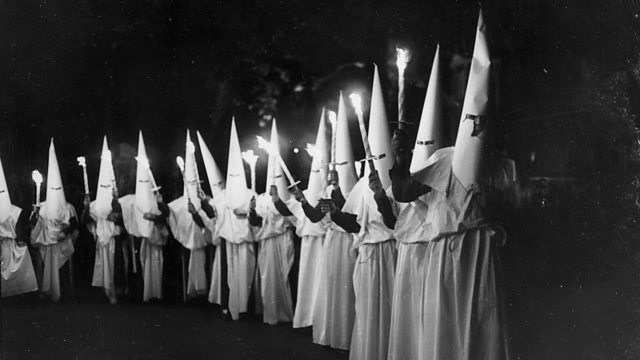 How Has The Ku Klux Klan Lasted So Long?

North America’s most notorious racist group the Ku Klux Klan is now part of an extreme-right wing movement protesting openly on America’s streets - how have they lasted so long?

North America’s most notorious racist group, the Ku Klux Klan fought the end of slavery in the 19th century, opposed civil rights in the 20th century and now forms part of a new extreme-right wing movement protesting openly, on America’s streets. Presented by James Fletcher and produced by Kate Lamble, The Inquiry asks four expert witnesses to answer this pressing question; how has the KKK managed to last so long? The answer can be found by looking at the origins of the KKK and the power of the white supremacist idea which became infamous for its’ distinctive costumes and deadly violence.

The American concept of freedom of speech has also helped give the KKK longevity. The views of the groups’ members are not shut down by the authorities. Rather, the KKK is allowed to speak and operate openly, within certain limits of the law. The hope is that counter protest and dialogue will expose the hatred and bigotry of its members.

Through hearing the views of one reformed racist, we learn how the group have been opportunistic in recruiting members. These include troubled young men, looking for family, security and meaning to their lives.

Finally, modern day technology has helped to spread the KKK’s message throughout the world via the internet. The group has been managed to mobilise and has recently, become emboldened by the election of President Donald Trump.

Are Video Games a Waste of Time?

What Can We Do With Our Dead?