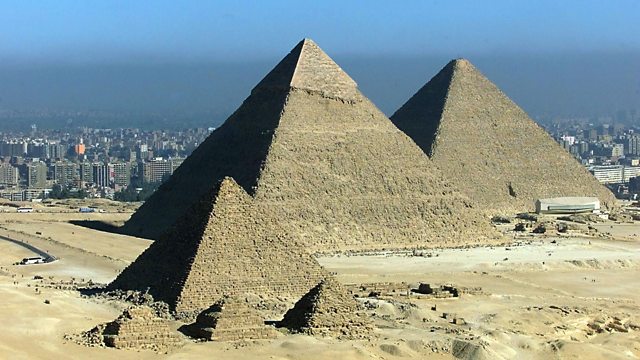 Secrets of the Great Pyramid

Rajan Datar and guests explore the largest pyramid ever built - the Great Pyramid of Giza. Also known as the Pyramid of Khufu after the Pharaoh who commissioned it as his tomb.

The Great Pyramid of Giza in Egypt is one of the greatest wonders of the ancient World. It is the largest pyramid ever built and even today, with advanced satellite and thermal imaging and other high tech science, we don’t know everything about the pyramid- exactly what’s inside or how it was built. To explore the history of The Great Pyramid - also known as the Pyramid of Khufu, after the Pharaoh who commissioned it as his tomb, Rajan Datar is joined by Professor Salima Ikram, Distinguished University Professor and Egyptology Unit Head at the American University in Cairo, space archaeologist Dr Sarah Parcak, a National Geographic fellow and associate Professor at Birmingham University Alabama in the USA and Dr Joyce Tyldesley, an archaeologist and Egyptologist from the University of Manchester in the UK.

Salima Ikram at The American University in Cairo

Sarah Parcak at the University of Alabama, Birmingham

Joyce Tildesley at The University of Manchester