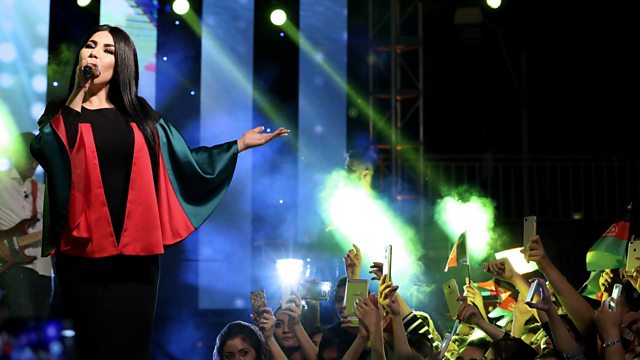 Music In Extremis: A Pop Concert in Kabul

In the week of another tragic bomb attack in Kabul, singer Aryana Sayeed defied clerics and conservatives to stage a pop concert in the capital, celebrating Afghan Independence Day. The ‘Kim Kardashian of Kabul’ tells us why she believes in bringing music back to her home country and how her lyrics aim to give women a voice.

Does body armour make you a safer or braver artist on the streets of Kabul? Performance artist Kubra Khademi reflects on the act of provocation and protection that set out to reclaim public space for Afghan women but ultimately sent her into hiding.

An absent father, a terminal illness and a sweet tooth in Trinidad and Tobago: the ingredients for the short story The Sweet Sop, which won this year’s Commonwealth Short Story Prize. Author Ingrid Persaud tells Tina how she drew on personal experience and the legacy of the Caribbean’s colonial past in her writing.

And the Egyptian man, born a woman, whose transgender journey also transcended borders and language. Adam Kashmiry speaks to Tina from the Edinburgh Festival, where he’s currently starring in the play Adam, based on his own transformative story.

Picturing Politics: An Artist’s Response to the Kenyan Election

An Act Of Censorship Or Cultural Sensitivity?