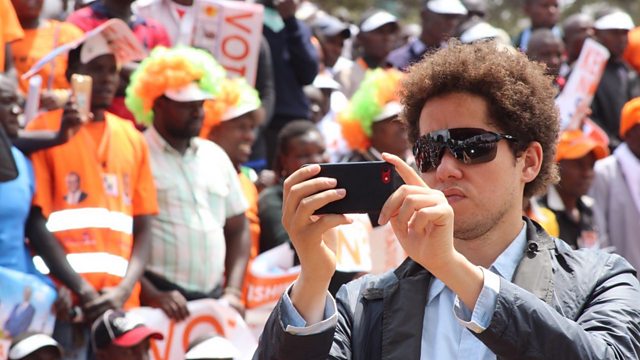 Picturing Politics: An Artist’s Response to the Kenyan Election

Michael Armitage is a Kenyan-British artist whose work combines materials and techniques from European and African traditions - layers of oil paint on Lubugo, a traditional bark fabric from Uganda. It explores themes from East African folklore, his own memory, and often responds to what’s going on in the news and current affairs of Kenya. We joined Michael at an opposition rally in the run-up to last week’s election in Kenya to see how it looked from a visual artist's point of view.

Ruth Behar is an anthropologist-turned-novelist who was born in Havana but grew up in New York after her family fled Cuba. Following Obama’s thawing of relations between Cuba and the US, she initiated a project for young writers from both countries to share stories with one another. As Trump talks about reversing Obama’s diplomatic efforts, what role now for Ruth’s bridge-building work?

André Naffis-Sahely is a poet with an Italian mother and Iranian father. He lives in Los Angeles now but he grew up in Abu Dhabi. His debut collection of poetry is called The Promised Land, and it offers glimpses of what life is like for different sections of society in the United Arab Emirates. They’re unflinching observations of the disparities between comfortable expat professionals and temporary migrant workers. The book also charts his own search for a place to call home.

Mamela Nyamza is a South African dancer and choreographer trained in classical ballet, modern dance, African dance, jazz, mime - even Butoh, a traditional Japanese form of dance theatre. She also happens to be a lesbian, and being gay in South Africa can be very dangerous indeed. She talks to us about the prevalence of homophobia in her country, and how she’s using her art to fight back, and change minds.

Beyond the Borders of Partition

Music In Extremis: A Pop Concert in Kabul