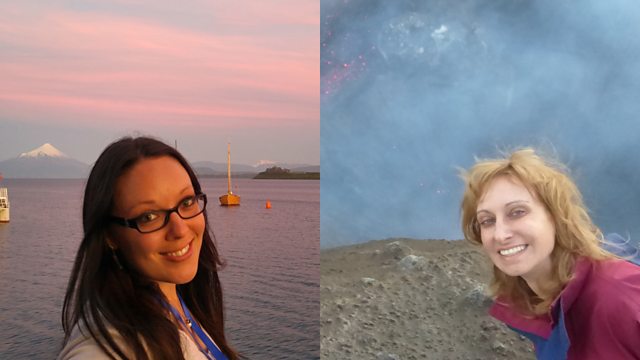 Spectacular volcanic eruptions on earth and in space - Kim Chakanetsa unites two women who share a deep love of volcanoes.

Janine Krippner is from New Zealand, and as a child visited Ngauruhoe - the volcano made famous as Mount Doom in the Lord of the Rings films - and had an intense feeling that this is where she belonged. Years later she found herself inside the crater collecting research data. Janine is now based at the University of Pittsburgh and studies remote volcanoes in Russia and the US and looks for clues as to how super-fast flows of hot gas and rocks called pyroclastic flows travel after eruptions.

Rosaly Lopes is a Senior Research Scientist at NASA's Jet Propulsion Laboratory, and she is also Manager of the Planetary Science Section. Born and raised in Brazil, Rosaly has visited over 60 active volcanoes on every continent, but as exciting as she finds these trips, volcanoes on other planets are her real focus. She has personally discovered 71 active volcanoes on Jupiter's moon Io, which has earned her a place in the record books.