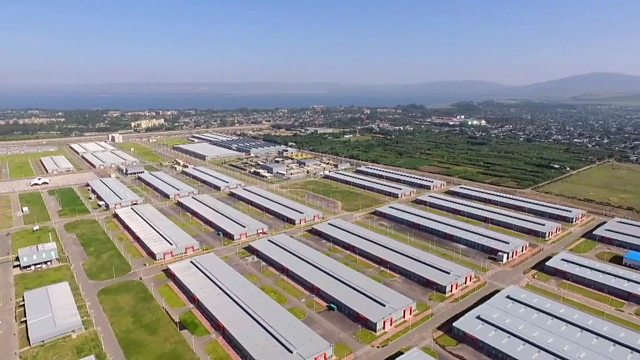 Stories of disaster and development from Ethiopia's industrial estates, the landslide in Sierra Leone, the Falkland Islands ... and the flamboyant bus stops of Central Asia

Pascale Harter introduces stories of construction and destruction from correspondents, reporters and writers around the world. In this edition:

Often, the rest of the world hears the name "Ethiopia" and remembers images of famine and poverty. But the country is one of Africa's demographic and economic giants - and it's hoping to become an industrial titan too. Alastair Leithead visits some of its gleaming new showcases - airports, housing projects, industrial estates - and explores why the nation's betting heavily on its new generation.

Olivia Acland is in the aftermath of the landslide near Freetown, Sierra Leone, which killed hundreds of people, and learns that few of the survivors have much faith in government promises to rehouse them.

Way out in the South Atlantic, Matthew Teller saw and heard many signs of how the identity of the Falkland Islands is changing. From the Zimbabwean mine-clearers to the Chilean hoteliers, it's a far more diverse place than it ever used to be.

And Simon Calder gets on the bus - well, several buses - for a journey across Central Asia. Along the way, he glories in the quirky and creative architecture used to build bus shelters, from Kazakhstan to Uzbekistan - and reveals why even Soviet control couldn't crush their character.

The Onlookers are Unconcerned

A Power in the Land