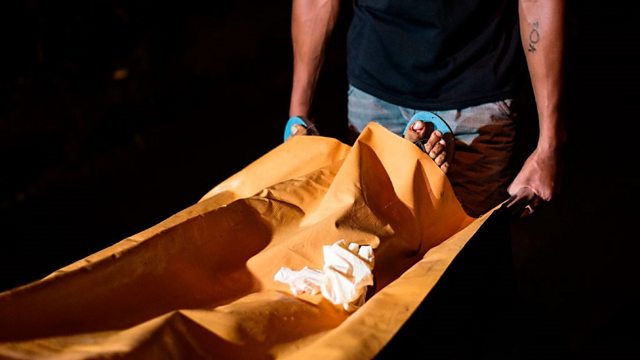 The Onlookers are Unconcerned

Pascale Harter introduces stories of bravery, apathy, and self-control from writers around the world.

In Manila, Colin Freeman joins the hardbitten reporters of the crime beat on their nightly hunt for homicides - covering the very public killings of drug users and dealers which have swept the Philippines. It's a milieu straight out of film noir - right down to the press pack at the morgue.

Rupert Wingfield Hayes is on the island of Guam - sometimes called "the USA's military storehouse in the Pacific", and which has been targeted for possible bombing by North Korea. While nuclear tensions swirl between superpowers, the island itself is staying resolutely calm.

Cape Verde is an island nation once best-known for its national mood of melancholia - a place you'd have to leave if you wanted to get anything done. But Hannah Armstrong finds that there's a new sense of ambition, and new prosperity, among its people.

And as South Asia marks the 70th anniversary of the Partition of what was then British India, Secunder Kermani meets some unrepentant killers. He hears graphic, first-hand accounts from some old men of how they took part in lethal sectarian mobs in 1947 - and why they've never regretted it.

Photo: A coroner a bearing a stretcher with the body of an alleged drug dealer murdered by unidentified assailants in Manila, Philippines - July 2017 (NOEL CELIS/AFP/Getty Images)