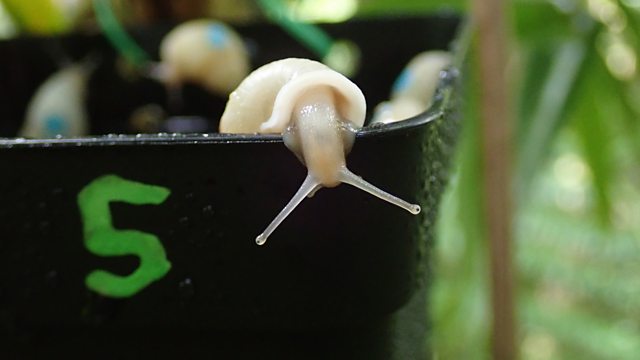 Partula tree snails are the size of a human thumbnail, but these icons of evolution have been driven to extinction in their French Polynesian homeland.

This is a big story about a little snail. Biologist Helen Scales relates an epic tale that spans the globe and involves calamity, tragedy, extinction and we hope, salvation. It stars the tiny tree-dwelling mollusc from French Polynesia, Partula, a snail that has captivated scientists for centuries. Like Charles Darwin studied finches on the Galapagos, Partula became an icon of evolution because, in the living laboratories of the Pacific islands, it had evolved into multiple species. But a calamity drove Partula to extinction, when a botched biological control, the predatory Rosy Wolf Snail, was introduced. It was supposed to eat another problem mollusc, but in a cruel twist, devoured tiny Partula instead. An international rescue mission was scrambled to save a species and from just one or two rescued individuals, populations of this snail species have been built up over thirty years in captive breeding programmes in zoos around the world. And now, in the nailbiting sequel, we track Partula’s journey home.