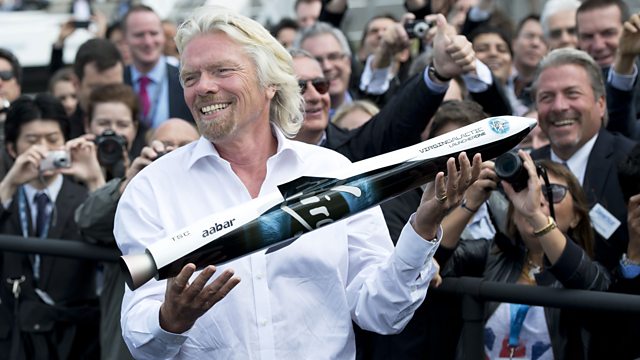 Virgin Hyperloop One and Virgin Galactic; Unrest, the ME documentary; Brighton Digital Festival - the Messy Edge; The Chinese Typewriter: A History

Virgin has recently invested in a futuristic technology, Virgin Hyperloop One, which aims to create a speedy pod-based transport system. Alison van Diggelen talks to Richard Branson about his ambitious plans, including supersonic and space travel.

Unrest, a documentary exploring the mysterious condition of ME, was filmed across continents by the director Jennifer Brea who was mostly confined to her bed with ME/CFS. Brea tells Click how she could call in via Skype from her bed, and then interviewees could see her reflection from the teleprompter in the lens of the camera.

A new conference for Brighton Digital Festival, The Messy Edge, is an exploration of the frontiers of digital culture, a challenge to dominant perspectives and a place to consider how we run the risk of building a future on the deeply flawed foundations of the present. Bill Thompson reports from the conference.

In The Chinese Typewriter: A History, Tom Mullaney recalls the great engineering and linguistic challenges in the 19th and 20th Centuries of getting the Chinese language onto a table top machine. One consequence was the development of predictive text in the Chinese IT world long before it appeared in the West. Click talks to Tom Mullaney.

Tim O’Reilly’s Vision of the Future