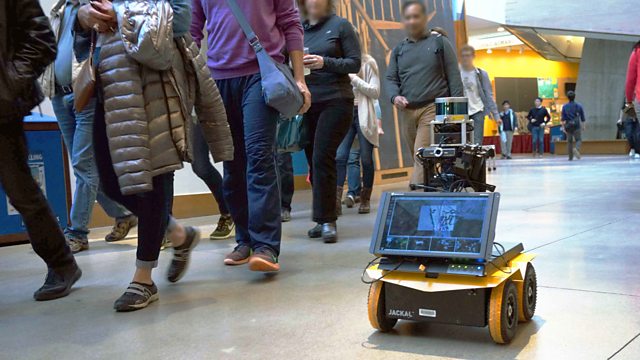 Autonomous robots with “socially aware navigation,” are being road-tested by MIT researchers to keep pace with foot traffic while observing these general codes of pedestrian conduct. Click talks to one of the researchers, Michael Everett.

A coffee machine with a life of its own is dispensing coffee to punters with an ethical preference. Roland Pease reports on the Edinburgh University researchers looking into bitcoin and ethical trading

Brighton Digital Festival this year with has a focus on what it calls ‘The Messy Edge’, exploring the frontiers of digital culture. Click talks to one of the key organisers, Laurence Hill.

Should we be scared of the influence of toy robots on children? Click is joined by Mark Palatucci with Cozmo, a tiny robot toy with a "brain" and personality, and Professor Karen Panetta to discuss the growing role that artificial intelligence software and early-stage humanoid robots are playing in young children’s lives.

Are You in Danger of Becoming Addicted to Television?