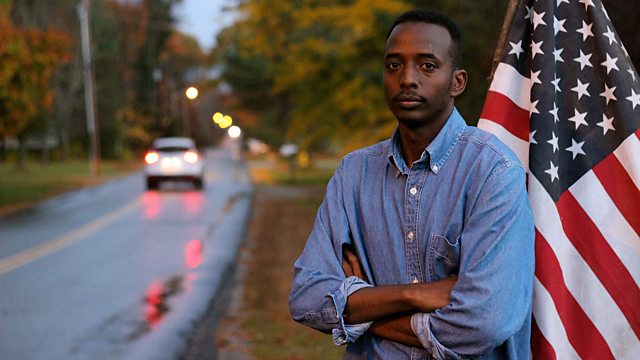 A young Somali refugee tries to live the American dream: But Abdi Nor Iftin finds himself living in the whitest state in the USA.

A young Somali refugee struggles to live the American dream in the USA's whitest state, during the rise of Donald Trump. Is the dream still possible?

In December 2014, in 'Abdi and the Golden Ticket,' the BBC's Leo Hornak followed Somali refugee Abdi Nor Iftin as he battled to make it to America through the US green card lottery.

Since then, Abdi been trying to make a new life for himself in the US state of Maine, striving to become a 'real American'. He hopes to get educated and start a career, but the pressures of supporting a family in Mogadishu make this seem ever more difficult. And then there is the plan to have his brother Hassan join him.

The state of Maine remains almost entirely white, and amid growing public fear of Muslims and immigration, Abdi's American dream runs into obstacles that he never expected. Using personal conversations and audio diaries recorded over three years, 'Abdi in America' documents the highs and lows of one man's struggle to become American.

(Photo: Somali refugee Abdi Nor, in Maine, standing next to a United States flag)

Bulgaria on a Cliff Edge