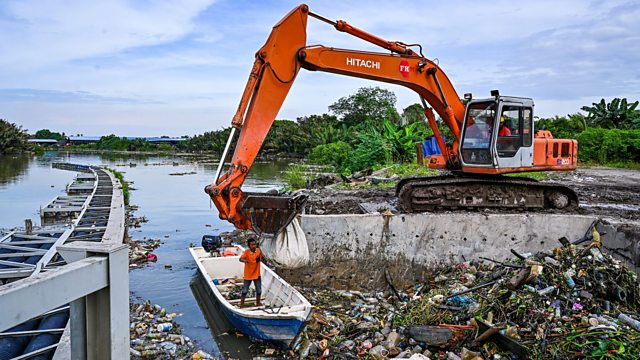 China's decision to ban imports of waste plastic caused a problem for other Asian nations.

China's decision to ban imports of waste plastic caused a problem for other Asian nations. Heng Kiah Chun of Greenpeace says the recent quadrupling from the European Union to Malaysia of shipments of plastic nominally for recycling has led to the illegal dumping of waste in the country, with much of it getting burned. Ioannis Bakas is a waste prevention expert at the European Environment Agency, and explains why countries like Malaysia end up as dumping grounds for waste from wealthier nations. And Sarah Robinson, who is in charge of waste management on the Channel island of Guernsey, tells us how it has achieved one of the highest recycling rates in the world, whilst not sending its waste very far. Also in the programme, a major agreement governing the transfer of EU citizens' data to the United States has been struck down by the European Court of Justice. Technology analyst Stephanie Hare discusses the implications, and we get reaction from Christian Borggreen, vice-president of the Computer and Communications Industry Association, which represents the likes of Facebook and Google. Plus, the BBC's Dougal Shaw reports on how in the coronavirus era, video CV's for recruitment have become a popular way for people to try and stand out from the crowd.