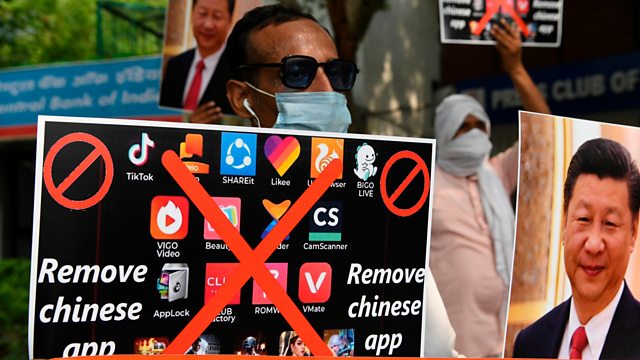 Business relations have declined between India and China following a border dispute.

Business relations have declined between India and China following a border dispute. Users of the Chinese mobile app TikTok express frustration that they're no longer allowed to use the service since the Indian government banned it along with dozens of other apps. Renu Agal, Hindi editor at The Print explains the background to the row, whilst we get wider context from Dr Yu Jie, senior research fellow on China at Chatham House. And Parveen Khandelwal, secretary of the Confederation of All Indian Traders discusses a boycott of Chinese goods that many shops are engaged in. Also in the programme, the US economy created 4.8 million jobs in June. The BBC's Samira Hussein brings us the latest figures, and we examine the likely impact of it all on the US economy, with Chris Low of FHN Financial. Plus, a committee of the UK House of Lords is calling for tougher controls on loot boxes that can be bought in video games, which contain special characters or equipment, arguing that it is a form of gambling. Lord Grade is chairman of the committee, and explains why it has taken that stance. And we get reaction from Jo Twist, chief executive of UKIE, the trade body for the UK's games and interactive entertainment industry.